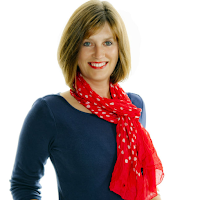 Here you will find Elaine’s thoughts on the practice of acupuncture forms and PSYCH-K®, as well as advice on a variety of alternative health subjects. In these articles, we hope to give you the tools to strengthen mind, body and spirit.

Elaine will be using her expertise to inform on subjects including fertility, cosmetic acupuncture, the PSYCH-K® system and more.

This is also the place to find out about the latest news and updates regarding Elaine Collins Acupuncture & Wellbeing, so check in daily to make sure you don’t miss anything!

Happy New Year and have an amazing 2017

I wish you an amazing 2017. On Hogmany I spent some time reflecting on my year in 2016. I feel very blessed and following during my time of reflection and since I have had a big cheesy smile on my face....I am blessed to have had many awesome adventures as well as lots of very simple pleasures like baking Christmas cake with my mum Mags, my sister Sharon and her adorable children Niamh, Josh and Gracie, mixing our Christmas wish into the fruit before baking the cake. Lottie and Betsy my wee Yorkies fighting to give me the best welcome on returning home, delighting in the robin red breast nesting in my garden and watching the glorious sunset from my treatment room.

Last year was filled with not just work but travel, golf, spending time with family and friends who I cherish and love dearly. I feel blessed and grateful for my health. I am very fortunate to do a job that I love and fulfills me. I am grateful to all of my fantastic clients who have placed their trust in me and the therapies I offer. It has been very humbling watching clients grow and transform their lives by changing their past limiting beliefs to self enhancing new beliefs [ no longer claustrophobic, fearless at presenting to large numbers, resolving Post Traumatic Stress - and resolving allergies to name some]. I never cease to be amazed by the changes Acupuncture and PSYCH-K can offer. It is especially humbling when clients fall pregnant and start a new chapter in their lives.

Like many of you I start my New Year with a resolution - no, not losing weight or signing up to a gym ....this year I’m resolving to have a year of Gratitude! I have bought a lovely notebook and I will call it my “Gratitude” journal. I will start and end each day by writing in 3 things I am grateful for and why I’m grateful. Doing this will ensure that I begin and end my day in a state of gratitude. I believe it’s much better to start and end the day with positive and lovely thoughts as opposed to waking up and going to bed with thoughts of worry and negativity.

Why don’t you try it? I would love to hear about your experiences.

Have a magical 2017 filled with health, love, prosperity.

This year is the fifth year of Acupuncture Awareness Week, it is supported by the British Acupuncture Council, and is taking place from the 7 - 13 March 2016.

During the week I’m aiming to raise awareness and understanding around acupuncture. I will hopefully offer you wee snippets of interesting information - who knows, perhaps I will entice you to pop along for a chat and/or taster session.


Fact of the day! The needles used in traditional acupuncture are as fine as a human hair! (Yes really!)

Winner Of the Lucky Red Envelope

Congratulations to Frances Donaldson from Erskine for winning the Chinese New Year Lucky draw. She has won a heavenly relaxing Facial massage incorporating a blend of massage techniques, Acupressure, Metamorphic Technique and finishing with a Jade Roller.

Now before any cheeky Facebook friends say its a fix and demand a Stewards Enquiry! Frances had won the massage before she posted her lovely review on FB on the 24th February. Ishbel Waddell my willing helper for the draw picked Frances out of the “hat” yesterday :)

The 7th March marks the start of Acupuncture Awareness Week - so watch this space for news and events happening that week..

The Chinese New Year begins on 8th February 2016 and ends on 27th January 2017. China celebrate the new Year for 15 days beginning on the 8th February.

The celebrations begin on the second new moon after the winter solstice and ending on the full moon 15 days later - the beginning of the spring harvest.

Chinese astrology has been around for thousands of years, and there are similarities and differences between Chinese and Western astrology. Chinese astrology has twelve signs, just like Western astrology. The Chinese zodiac follows a twelve year cycle, each of the years being named after an animal. The Chinese believe that people born in a particular year take on the characteristics of the animal associated with that year.

This year is the year of the Monkey. 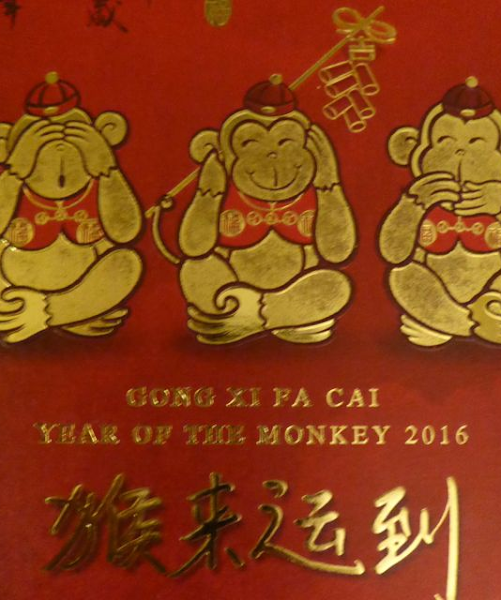 People born in the year of the Monkey are lively, quick-witted, curious, innovative and mischievous. [ I know a few cheeky monkeys.....namely my nieces Niamh and Gracie and nephew Josh....albeit they weren't born in the Monkey year but sum up the character of the Monkey.

There are many traditions during the New Year celebrations.

I have been lucky enough to have been in Asia leading up to the Chinese New Year both this year and last year. The villages, towns and cities are awash with red Lanterns. This is a symbol of luck and prosperity and by hanging them it means “ lighting the way” for good luck, a good harvest and prosperity for the coming year. 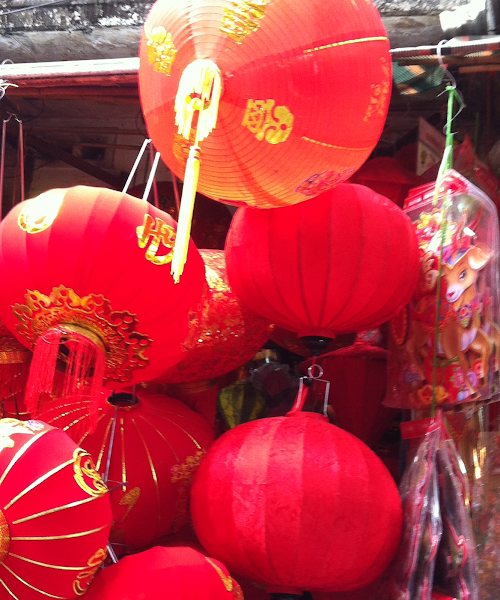 Leading up to and during Chinese New Year red and gold colors are plentiful. The color red symbolizes luck and is believed to ward away evil. It is custom that family elders give children a red envelope containing money at New Year. This red envelope is given to the children as a blessing and symbolizes prosperity. Yellow and gold are considered the most beautiful of colors and Chinese believe that these colors generate Yin and Yang, therefore it is the centre of everything. Yellow symbolizes neutrality and good luck.

On New Year’s day families come together and have a lavish feast - the main dish being fish as this symbolizes abundance, affluence and prosperity. This evening to celebrate Chinese New Year I will be enjoying a dinner of sea bass with sizzled ginger, chilli & spring onions !

To celebrate the Year of the Monkey and Chinese New Year all clients who receive treatments between the 8th and 22nd. of February will have the opportunity to win a Lucky Red Envelope which will give the winner a complementary Facial Massage.

Well, thats the end of my first blog. I hope you have found it interesting.